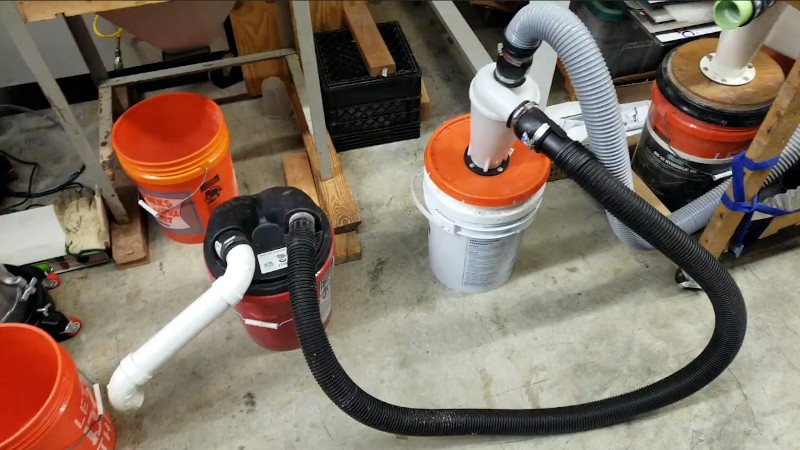 A critical element of a good blasting cabinet setup is a vacuum system that can suck out the dust, blasting media, and bits of removed material faster than it collects inside the chamber. A cyclone separator can get the job done, but since it dumps all the waste from the cabinet into one bucket, it can make reusing the blasting material a dirty job. But as [Daniel Bauen] explains in the latest Engineerable video, his two-stage dust collector is able to keep the cabinet clear while separating the used blasting material into its own container.

Basically, the idea here is to to use two different cyclone separators: one that’s very effective, and a cheap model that’s only able to remove large particulates. By running the air from the cabinet through the cheap separator first, the used blasting media is captured in a dedicated bucket. From there, the air runs through the high-efficiency separator to extract the finer dust. Finally, the shop vacuum [Daniel] is using has its own washable HEPA filter to catch anything that makes it through the two extractors; though he notes that it only rarely needs to be cleaned out.

Normally this system is attached directly to the blasting cabinet, and it does a good job of capturing the bulk of the used blasting media in real-time. But to make sure the media is really cleaned up being using it again, [Daniel] will actually run the contents of the first bucket through the system a few more times to separate out any of the more stubborn dust that might be mixed in.

Of course not everyone has the space, or even the need, for such an elaborate blasting setup. If you’re just trying to quickly clean up some parts on the cheap, you can make a basic blaster for around $6. Good luck capturing the media though.