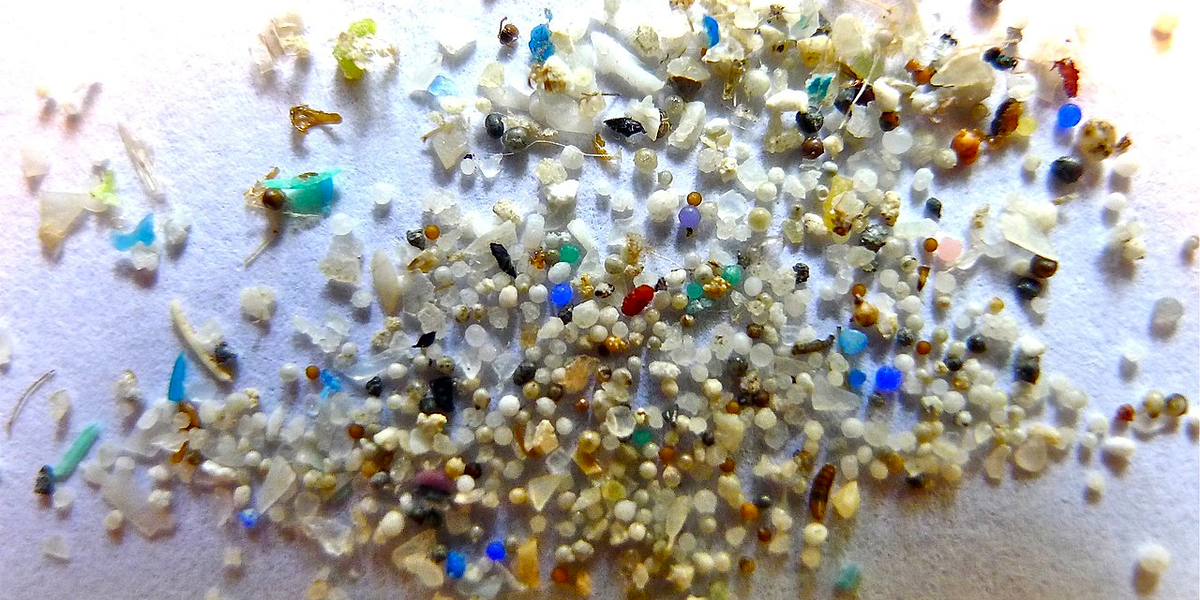 Plastics took off in the 20th century, with the new class of materials finding all manner of applications that metal, wood and paper simply couldn’t deliver on. Every field from electronics to the packaging of food found that plastics could play a role.

Now, over 150 years since the development of Parkesine in 1867, we’re now realizing that plastics come with more than a few drawbacks. They don’t break down well in nature, and now microplastics are beginning to appear all over the Earth, even in places where humans rarely tread. It seems they may even spread via the air, so let’s take a look at this growing problem and what can be done about it.

Microplastics are commonly defined as any type of plastic particle less than 5 mm in length. The term was coined by Richard Thompson, who discovered the particles in abundance on British beaches while working as a marine ecologist in 2004. The particles are shed from all manner of plastic items, from food and beverage containers to polyester fleece clothing.

Microplastic particles have been found everywhere; in table salt, drinking water, and crucially, even floating in the air itself. Transport via the wind has carried microplastics to far off-locales where humans rarely tread, with particles found in Arctic snow and in remote mountainous areas too.

The simple fact is, there is a huge amount of plastic out in the environment. With heat, UV light and general exposure, it’s all degrading and shedding tiny particles all the time. Many of these are so small and light that they can float freely in water or even the air, and have been found at altitudes of 11,000 feet in aerial sampling.

Is It A Problem?

Given the prevalence of these plastics across land, sea, and air, it’s perhaps unsurprising to know that we may be ingesting anywhere up to 100,000 microplastic particles daily. The fact that you’re not regularly fishing out chunks of plastic from your bottled water or food indicates that most are smaller than can be seen with the naked eye.

A study by the World Wildlife Foundation stated that people may be consuming up to five grams of plastic a week, roughly as much as makes up the average credit card. This figure was quickly cited far and wide by the world’s media, but other studies have determined human intake to be much lower, on the order of perhaps one credit card a year in the worst cases. Median levels, however, are expected to be much lower. Interestingly, microplastics in the air are considered a significant contributor to these figures, though bottled water and seafood are bigger concerns.

The problem is that the impact of this microplastic intake on human health is not yet clear. Studies are only just beginning to look at the issue, and it’s a very complicated thing to investigate. Microplastics come in a variety of materials, all with their own unique properties, and may absorb toxins from the environment or interact chemically in various ways themselves.

Plastic particles behave differently depending on their size too. Great concern exists around nanoplastics, which are small enough to cross the blood-brain barrier responsible for protecting our brains from the nastier stuff circulating in our body. These particles are also small enough that they could cross into cells and disrupt their behaviour.

Thus far, the potential health effects remain unclear and the subject of further research. However, there are broader concerns too. Microplastic particles could come to have an effect on the Earth’s climate. Thus far, research suggests that microplastics in the air could create a scattering effect, reflecting sunlight back into space in a similar way to aerosols in the atmosphere. However, the effect would be small, especially given the concentrations of microplastics presently in the air. These particles can also theoretically absorb heat emitted from Earth, so the effect is not guaranteed to be entirely positive. To determine the absolute net effect will likely require further investigation, though pumping lots of tiny plastic particles in the air won’t be a solution to global warming. It would cause altogether too many other problems along the way.

At this stage, researchers aren’t yet convinced there’s a huge risk to human health. Levels are still too low to cause obvious problems. However, the problem is concerning, and with the huge amount of plastic degrading in landfills and rivers and oceans around the world, it’s not going away any time soon.

Microplastics are generally too small to be effectively cleaned up after the fact. If they do turn out to be deleterious to our health or survival, the only way to solve the issue will be to collect as much plastic trash as possible from the environment and minimise production as well.

In any case, research will continue to shed light on the scale of the issue, and ideally, potential solutions. In the mean time, cutting down on your plastic intake is simple. Reduce the use of plastic food containers and bottles, and especially stop microwaving food and beverages in those containers.

It’s not all alarmist, of course. We’ve been living with microplastics in the environment for years now, even if we didn’t know it. Particulate pollution from other sources is also a problem, and that hasn’t taken us out just yet either. As it stands, however, the microplastics in our food, water, and air are something we’ll have to continue living with in the meantime.