Janksy Robot Paints Murals One Dot At A Time 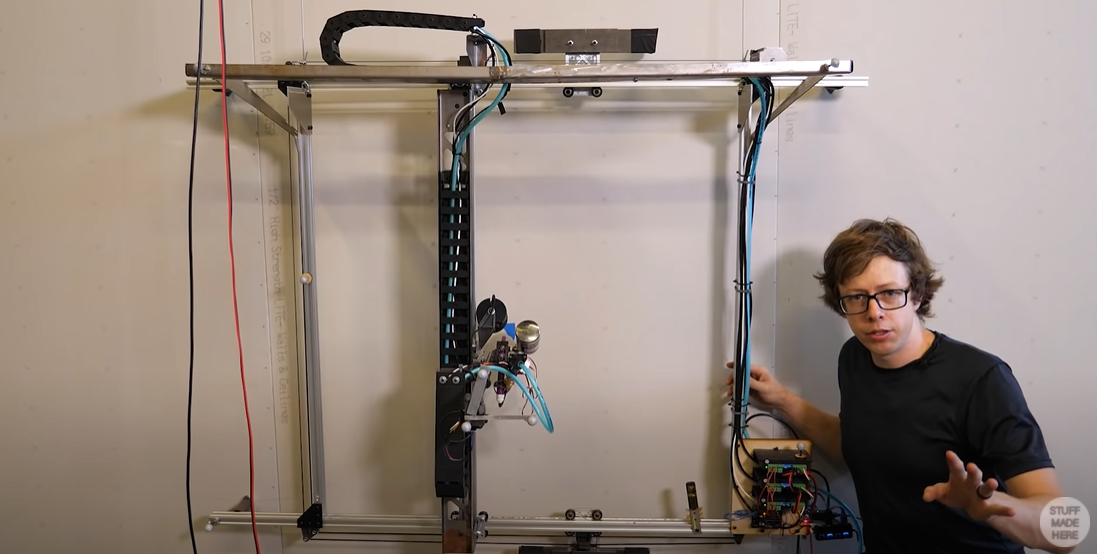 [Stuff Made Here] has a new shop, with a huge blank wall. A blank white wall just wouldn’t do, so rather than paint the wall himself, he designed a robot to do it for him. (Video, embedded below.)

The result is Janksy. A huge machine made of metal, wood, and 3D printed parts. Janksy is an ingenious design in that it has two sets of X and Y axis.  A large, slow-moving system of rails and cables positions the robot roughly in the right area of the wall. From there a much smaller, but faster and more precise motion system makes the final moves.

The “business end” of Janksy is of course a paint sprayer; in this case a Harbor Freight model. The medium of choice is acrylic paint, as Janksy will be painting for several days, and didn’t want to gas himself with the volatile solvents of more traditional paints.

Janksy mainly sprays dots of paint. Up close you’ll only see the dots, but step back a bit and a full image takes shape. It’s a technique called Pointillism, which puts Janksy in the company of artists like Georges Seurat and
Vincent van Gogh.

While human artists mix colors to produce the hue they want, robots can’t easily do that. [Stuff Made Here] spends quite a bit of time explaining basic color theory, and how dots of cyan, magenta, and yellow will combine in the eye to produce colors – much the way a monitor uses pixels of red, green, and blue light.

After all this work, you might be wondering what [Stuff Made Here] would want on his wall. Well, let’s just say that he loves his wife, even though his pranks on here often elicit an exasperated glare. Watch the video after the break for the full story.

You don’t have to build a huge drawing robot though – we’ve seen some great plotters on a much smaller scale, including one that will play tic-tac-toe.