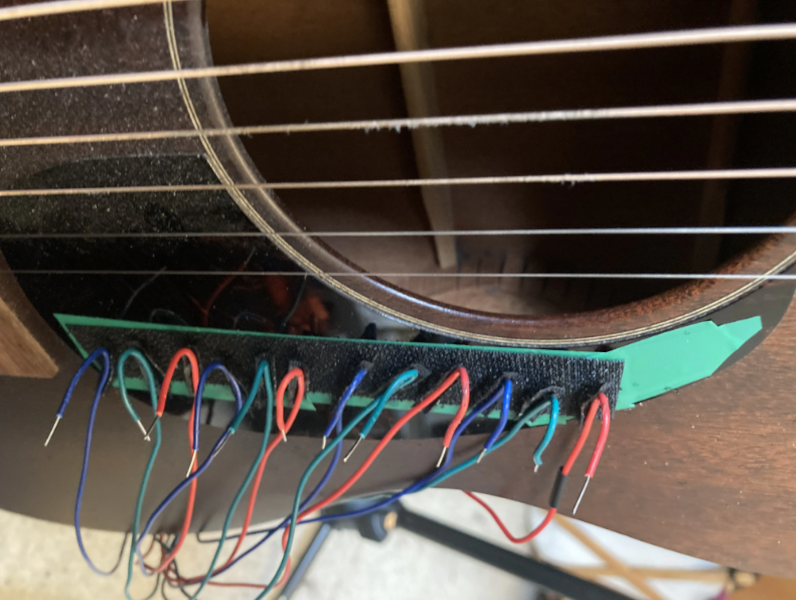 For a standard that has been in use since the 1980s, MIDI is still one of the most dominant forces on the musical scene even today. It’s fast, flexible, and offers a standard recognized industry-wide over many different types of electronic instruments. Even things which aren’t instruments can be turned into musical devices like the infamous banana keyboard via the magic of MIDI, and it also allows augmentation of standard instruments with other capabilities like this guitar with a MIDI interface built into the pick guard.

[Ezra] is the creator of this unique musical instrument which adds quite a few capabilities to his guitar. The setup is fairly straightforward: twelve wires run to the pick guard which are set up as capacitive sensors and correspond with a note on the chromatic scale. Instead of using touchpads, using wires allows him to bend away the “notes” that he doesn’t need for any particular piece of music. The wires are tied back to an Adafruit Feather 32u4 microcontroller behind the neck of the guitar which also has a few selectors for changing the way that the device creates tones. He can set the interface to emit single notes or continuously play notes, change the style, can change their octave, and plenty of other features as well.

One of the goals of this project was to increase a guitar player’s versatility when doing live performances, and we would have to agree that this gives a musician a much wider range of abilities without otherwise needing a lot of complex or expensive equipment on stage. We’ve seen a few other MIDI-based builds focused on live performances lately, too, like this one which allows a band to stay in sync with each other.