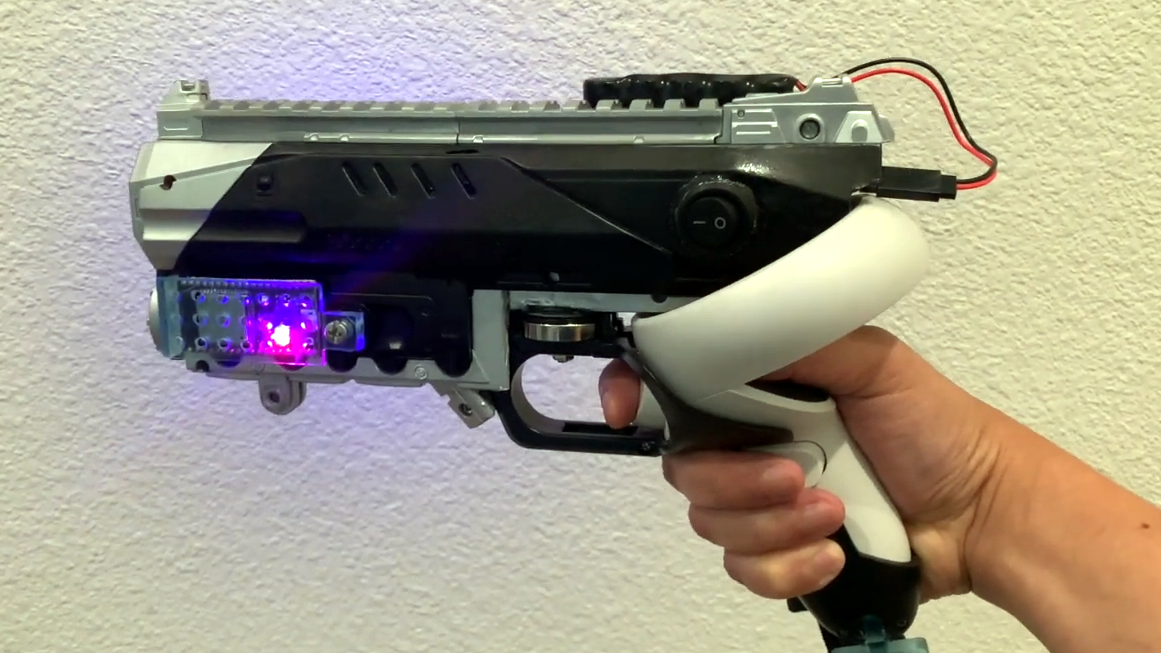 This VR Haptic Gun by [Robert Enriquez] is the result of hacking together different off-the-shelf products and tying it all together with an ESP32 development board. The result? A gun frame that integrates a VR controller (meaning it can be tracked and used in VR) and provides mild force feedback thanks to a motor that moves with each shot.

But that’s not all! Using the WiFi capabilities of the ESP32 board, the gun also responds to signals sent by a piece of software intended to drive commercial haptics hardware. That software hooks into the VR game and sends signals over the network telling the gun what’s happening, and [Robert]’s firmware acts on those signals. In short, every time [Robert] fires the gun in VR, the one in his hand recoils in synchronization with the game events. The effect is mild, but when it comes to tactile feedback, a little can go a long way.

The fact that this kind of experimentation is easily and affordably within the reach of hobbyists is wonderful, and VR certainly has plenty of room for amateurs to break new ground, as we’ve seen with projects like low-cost haptic VR gloves.

[Robert] walks through every phase of his gun’s design, explaining how he made various square pegs fit into round holes, and provides links to parts and resources in the project’s GitHub repository. There’s a video tour embedded below the page break, but if you want to jump straight to a demonstration in Valve’s Half-Life: Alyx, here’s a link to test firing at 10:19 in.

There are a number of improvements waiting to be done, but [Robert] definitely understands the value of getting something working, even if it’s a bit rough. After all, nothing fills out a to-do list or surfaces hidden problems like a prototype. Watch everything in detail in the video tour, embedded below.