Digital Painting On An IPad With Real Brushes 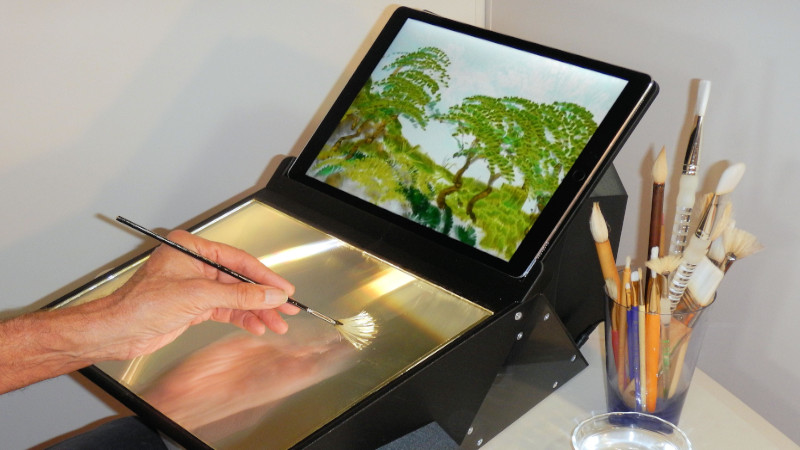 Drawing tablets are a great way to make digital art, and iPads and other tablets are similarly popular in this area. However, they all typically involve using some sort of special stylus for input. [Richard Greene] developed another method, with Light Strokes for the iPad letting one “paint” with real paint brushes instead!

The system uses a Fresnel prism in view of the iPad’s camera. This allows the camera to see only the parts of a paint brush, sponge, or other implement, as they make contact with the surface of the prism itself. This is via the principle known as total internal reflection.

Thus, simply wetting a paintbrush, sponge, or even a finger, allows one to paint quite authentically on the surface of the prism. The corresponding Light Strokes app on the iPad turns this into the pretty pixels of your creation. The app also allows one to experiment with all manner of fancy brush effects, too.

The build requires some finesse, with the lamination of the special Fresnel film onto glass using liquid optically clear adhesive, or LOCA. A series of mirrors are then assembled in an enclosure, allowing the iPad to be mounted with the camera having a good view of the glass painting area.

The project takes advantage of a simple physical effect in order to create a great artistic tool. Alternatively, if you prefer to draw directly, consider whipping up your own screen-based drawing tablet. Video after the break.