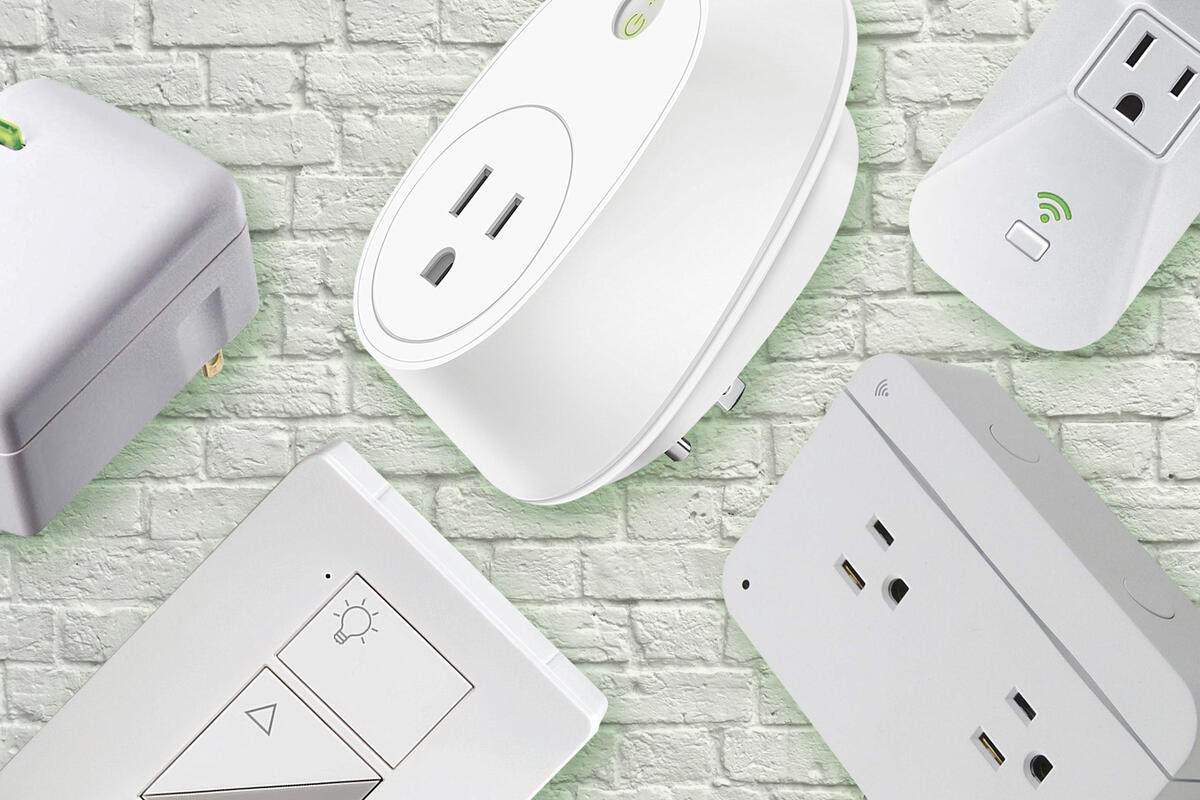 Every room in your house has them: power outlets, and they’re about as dumb as technology can be. To create a true smart home, you need to upgrade the way your wiring works, so that it can be controlled, managed, and monitored from afar.

You could hire an electrician to rip out your existing outlets and replace them with smart in-wall models, but there’s an easier, less-expensive way: Stick a smart plug in those outlets. They work just the way they sound: The outlet in the wall doesn’t change, you just configure the add-on plug using an app, connect it to your network, and use it to control whatever’s plugged into it.

Smart plugs are handy in all kinds of ways. Some models have built-in dimmers, so you can adjust the brightness of the lamp that’s plugged into them; others can power small appliances, such as a fan or space heater. Others can be scheduled, so you can make your home look lived in while you’re away on vacation, or so that you can limit the hours your kids can play video games or watch TV.

Which smart plug is best for your home? Here are our top choices, plus a shopping guide that will help you decide which one is right for you if none of our picks fits your needs. You can also click here to see a list of the all the smart plugs we’ve reviewed to date.

Updated October 25, 2021 to add our TP-Link Kasa Smart Wi-Fi Plug Mini review. This diminutive smart plug is short on frills—you won’t get energy monitoring or HomeKit compatibility, for starters—but simple might be all you need. And at $10 a pop (even less, if you buy them in a multi-pack), you won’t wince at the price.

Best smart plug for most people

Leviton continues to make our favorite smart plug, and its second-generation device—model D215P—adds HomeKit compatibility to its repertoire (although we encountered a little difficulty getting that feature to work right off the bat). Like its predecessor, this smart plug connects directly to your network over Wi-Fi, so you don’t need to invest in a hub. And its slim form factor means you can plug two of them into the same duplex outlet. This is an on/off device, not a dimmer. If you need dimming functions, consider Lutron’s second-gen Decora Smart Mini Plug-In Dimmer (model D23LP) .

Wyze’s entry-level smart plug is all that most users will need, and it’ll cost you less than $8 per unit.

Wyze Labs’ smart plug won’t report your energy consumption, and it’s limited to on/off functionality, not dimming—but it’s the least-expensive smart plug you’ll find, and it incorporates into the broader Wyze Labs’ smart home ecosystem, so it was an easy choice to be our top pick in the budget category.

The hub in Lutron’s starter kit can control more than just the smart plugs that come with it. It also supports Lutron’s in-wall dimmer switches and you can use it to schedule and automate Lutron’s line of Serena powered window shades. What’s more, you can incorporate the kit into a broader smart home system, and it’s compatible with Apple’s HomeKit ecosystem, too.

TP-Link’s Kasa Smart Wi-Fi Power Strip makes all the right choices, from a sleek design that fits in with home decor to a set of advanced scheduling options for every kind of routine and travel need—and surge protection.

There’s isn’t a lot of competition in this area, but it’s not just that TP-Link wins by default. The Kasa Smart Wi-Fi Power Strip features six grounded outlets that can be independently controlled and scheduled, plus three fast USB charging ports. It of course offers protection from power surges as well. It might seem expensive at around $80, but it’s actually a pretty strong deal when you compare it to dual-outlet smart plugs that cost about $60.

The Wyze Plug Outdoor isn’t the $10 bargain it was when first announced last December, but it’s still an incredible value. It not only beats the competition on price, it also delivers some features those devices don’t have. You can control its two outlets independently, for example, and thanks to its integrated photo cell, you can program the device to turn its outlets on at sunset and off at sunrise, even if the plug is out of range of your Wi-Fi network (just program while connected to your network and then move it to its final destination—the instructions will be stored in its memory). The plug will also monitor and report on your energy consumption. That’s a lot to offer for a $17 list price.

What to look for when shopping

Smart plugs might seem like a commodity, but they cover a wide range of design styles, capabilities, and compatibilities. If you’re in the market for a smart plug, consider how your environment—and what you plan to connect to the smart plug—matches the following list of features.

As always, full reviews of all the smart plug hardware on the market follow at the end of the buyers’ guide.

Indoor vs. outdoor: Most smart plugs can only be used inside, since they aren’t weatherproof. (These are almost invariably white in color.) Weatherized switches (almost always black) are clearly denoted as safe for use outside.

Hub requirements: If you need to control the switch through a third-party hub like SmartThings or Wink, that’s one more piece of gear you’ll need to budget for. In many cases, a switch vendor will also offer its own hub as an option, though these can be limited in flexibility and features. Using a hub will also make it easier to interconnect various devices, so if you want to press a single button to turn on both overhead lights and lamps at the same time, a hub’s a great way to get this done.

HomeKit support: If you’re looking for compatibility with Apple’s HomeKit devices (and want to tell Siri to turn lights on and off), you’ll need to look for this support, which should be well-labeled on a product’s website and packaging.

Voice assistant compatibility: Many smart plugs work with Amazon Alexa, Google Assistant, or both. Support for Apple’s Siri is less common, but not hard to find. If you have Amazon Echo, Google Home, or Apple HomePod smart speakers in your home, you’ll love being able to turn sockets on and off with voice commands.

Power limitations: You can’t plug anything into a smart plug. Most are rated to handle just a few hundred watts of power consumption, which is fine for a lamp or a coffee maker, but you might encounter problems if you connect a hair dryer or a professional blender to one. Power plug manufacturers tend to bury their maximum wattage ratings in the fine print, so check carefully beforehand if you expect the outlet to support high-draw appliances.

Number of plugs: Designs vary widely here. Some smart plugs replace a single plug, some replace two. Some designs offer two plugs, but only one of them is smart; the other is an always-on pass-through plug. Whichever design you choose, be sure to consider the physical design of the device itself. Many of these devices—even those with a single-plug design—cover up both wall sockets, which can greatly limit their utility. Smart power strips—which offer multiple, individually controlled smart plugs in a single device—are also entering the market. TechHive recently showered praise on a model from TP-Link.

Grounded or ungrounded: Some smart plugs offer only two-prong, ungrounded power. (This is done in part to dissuade you from attaching heavy machinery to the outlet.) If you need three-prong, fully grounded electricity, be sure to purchase one of the many smart plugs on the market that includes this feature.

Integrated dimming: If you’re hooking up a lamp to a smart plug, you can easily turn it into a dimmable lamp if the switch includes an onboard dimmer. These switches include hardware buttons to control dimming directly on the switch itself in addition to app-based control.