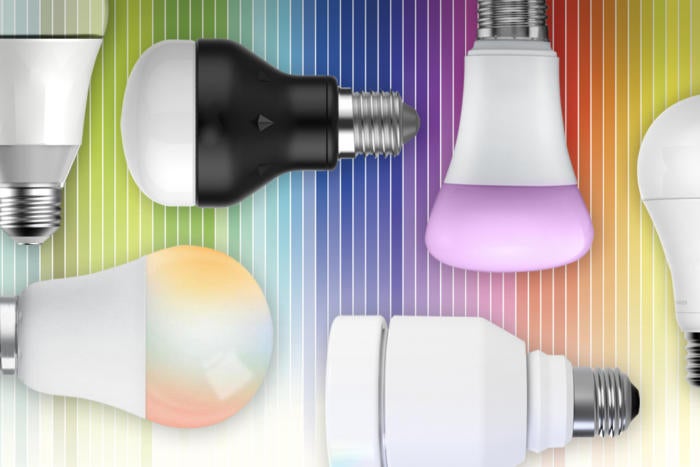 Smart LED bulbs that can be controlled by a hub or smartphone app are no longer a new idea. What is new is how far this technology has come since its advent just a few years ago. Also new: Products like the Nanoleaf Light Panels—a system of interlocking LED panels that let you decorate with light—fundamentally change the light-bulb concept.

Smart LED bulbs aren’t quite a commodity, but they are getting close to maturity as far as the market goes. Today’s bulbs are more compact, much brighter, have better color representation, and, for the most part, feature control apps that do more than ever and are easier to set up. Prices have also come down, with some no-name color-tunable bulbs now available for less than $10 each. (Buyer beware: You get what you pay for.)

White LED bulbs are smart, too

With their rainbow of hues and myriad party tricks, color LEDs get all the press in the world of smart lighting. It’s fun stuff, but the reality is that most of us will rarely find much of a need to turn all the lights in the house blue or red—unless it’s time to celebrate our team winning the World Series. Even then, you’ll probably want to turn them all back to white after the celebration.

White light is also important in its own right, as today there is plenty of science to show how various shades of white—with variations in color temperature—impact our psychological state. Cool light that’s closer to blue has an energizing effect, and is best in the morning. Warm light is relaxing, and is best after the sun goes down. Note, however, that not every white LED smart bulb is color-temperature-tunable. Check out the specs before you buy.

White smart bulbs downplay the party features that are a staple of color-tunable bulbs. On the other hand, white smart bulbs are less expensive than color bulbs, making it more affordable to roll them out in multiple rooms.

We’ve tested just about every color and white LED smart bulb on the market. You’ll find links to all our reviews at the bottom of the page, and we’ll update this story as new models are introduced.

Updated on October 22, 2021 with our story on how to sync your Philips Hue color-enabled bulbs, lamps, and light strips with Spotify. Once you sync your Hue and Spotify accounts, Hue’s new Spotify integration can use timestamped metadata on each music track to “anticipate” the beats, while an algorithm creates a “light script” that’s based on the song’s genre, tempo, and overall mood.

Philips was one of the first players in this market, and the company’s experience shows. Physically, its Hue Color and Ambiance bulbs haven’t changed much since their introduction in late 2012, but the latest generation lasts a lot longer and the company has added a Bluetooth radio that obviates the need for the Philips Hue Bridge (but most smart home denizens will want the Bridge anyway). The Philips Hue ecosystem is the industry’s deepest and broadest, including not only bulbs of every shape and size imaginable, but also indoor and outdoor fixtures as well, including the Philips Hue Calla pathway light and the Philips Hue Lily outdoor spotlight, both of which we like very much.

LIFX is a very strong competitor in the smart lighting space and comes a very close second place in our roundup. LIFX no longer has just A19 and BR30 form factors to offer, and we really like its unique  LIFX+ (which has an array of infrared LEDs that will help your home security camera see in the dark), but Philips still delivers much more diversity in its ecosystem and universe of third-party support.

No one does smart lighting better than Signify’s Philips Hue, and adding Bluetooth to the existing Zigbee control makes it cheaper and a whole lot easier to get started.

Our choice won’t surprise anyone who’s been following this market. Philips dominates this space and is also our top pick for best color LED smart bulb. The latest Hue bulbs can be controlled via Bluetooth or Zigbee (the latter requires the Philips Hue Bridge), they deliver high-quality light, and are backed by a strong warranty. We received the BR30 form factor for our review, but the bulb is also available in A19, candelabra, and even with vintage-style LED filaments.

LIFX’s pint-size bulb arrives in a non-tunable, white-only model, but drops a ton of features along the way.

If you want a smart white-only bulb that doesn’t require a smart home hub, the LIFX Mini White is a great choice. While it’s slightly dimmer than the full-size LIFX bulb, it produces a 60-watt-equivalent 800 lumens.

The new Cree Connected Max line of smart bulbs is agressively priced and available in all the most popular form factors: A19, A21, BR30, and PAR38. The A19 Tunable White + Color Changing bulb we reviewed costs just $10, and it supports both Bluetooth and Wi-Fi, so you don’t need to factor in the added cost of a hub to integrate it into your smart home. It’s a very good product.

Best smart bulb to pair with a security camera

This color smart bulb enhances the night vision of your security cameras through infrared LEDs, even when it’s turned off.

The Philips Hue Lightstrip Plus makes for a great and easy way to add accent lighting to kitchen counters, stairways, and other indoor areas, but the failure of an initial test unit gives us pause.

The 2020 version of the Philips Hue Lightstrip Plus LED is the only strip light to support both Bluetooth and the more robust Zigbee protocol (if you’re willing to pay for the required bridge to connect it to your Wi-Fi network, that is). The very nature of LED light strips renders them delicate devices, and the first review product we received broke after a short amount of time (the second one is holding up just fine). But we haven’t encountered a competing device that’s as versatile as this one.

Three control technologies continue to vie for leadership in the smart bulb market (Z-Wave is a major contender in smart lighting, but you won’t encounter it in bulbs—just in switches, plug-in modules, control panels, and smart-home hubs).

Each of these technologies has pros and cons, so before you attempt to settle on a specific bulb, first try to determine which tech is right for you. If you want to hook your bulbs into a broader smart-home system—such as SmartThings or Nest—Bluetooth bulbs are out. You can control more than one bulb with your phone, but you can’t connect it to sensors or other systems inside your home. Don’t like the idea of pairing a bulb to your phone? A Wi-Fi bulb will work best for you, though you won’t have quite as many options as you’ll find with a Zigbee product.

There’s a significant argument about the best way to install smart lighting, and two approaches present themselves. You can either go with expensive smart bulbs and control them all individually, or you can use cheap dumb bulbs and install smart switches to control all the lights on that circuit. Both approaches make sense: With smart bulbs, the biggest issue is cost, but there’s also complexity to deal with. While bulbs can usually be grouped based on location, this is only as intuitive to manage as the bulb control app.

Smart switches, on the other hand, are far more complicated to install—to the point where some users might be uncomfortable dealing with exposed wiring and would prefer to hire an electrician. Smart switches, however, provide more flexibility in many installations.

Habituated from years of flipping hard-wired switches, many users (or their children) will instinctively use the wall switch to turn the lights out when they leave a room. Once that happens, all the apps in the world won’t be able to turn the light back on until the switch is returned to the on position. While this won’t be an issue if you install smart switches, they can’t change a bulb’s color or color temperature.

That said, smart bulbs, no matter what the technology, still won’t be right for everyone. Notably, most of these bulbs cannot be dimmed via a hardwired wall switch (it messes with the power going to the radio, rendering them useless). Some will fail even if a dimmer is present on the circuit and dialed up to full power. The quality of light from an LED bulb is likely to be much, much better.

The good news is that bulb prices are going down, so it’s easier to get started with smart bulbs and less punishing should you find that a product doesn’t work for you. That said, we want to get you started on the right foot. So without further ado, here are deep dives into the most worthwhile color and white LED smart bulbs on the market.